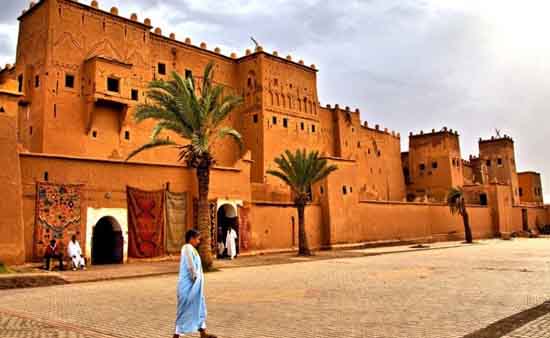 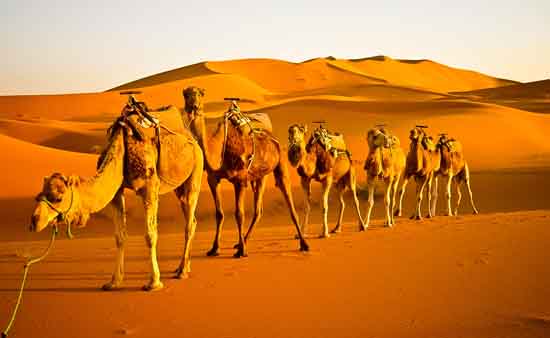 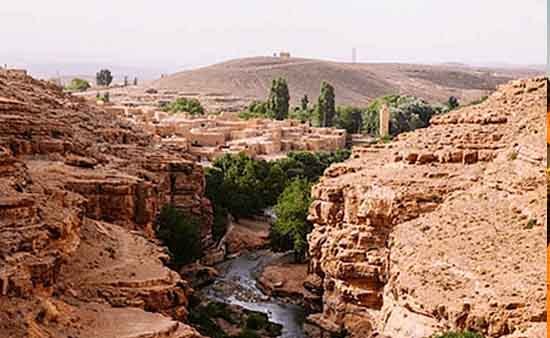 The trip will start from Fez city; recognized as an international heritage by the UNSCO, we will first meet at the hotel or raid where you are booked. Heading towards Merzouga known by its golden desert in the south east of Morocco. Through the route we will go drive by the city of Ifran; different from the other cities of the country Ifran has a European wonderful architecture surrounded by the Cedar forest; here we can stop to feed monkeys living in that forest and enjoy the fresh air. After that we will continue the route to Midelt city; located in the middle atlas; known for its apple production and the ancient mines of plumb. We will stop there for lunch time and continue the trip.The next direction will be Erfoud an oasis town in eastern Morocco, crossing the Tizi Ntalghamt a passage through the mountain that will transport you to another landscape view with deserted mountains except next the river. Arriving to Arfoud the trip we will drive directly to Merzouga stop at an auberge and leave your luggage there and ride camels to the khaima “the tent” in the desert. You will be served dinner then listen the local music with drums and dance around a campfire.

The second day you will wake up early in the morning to admire the sunrise shining at the golden sand.  After that we ride back on camels to the auberge. Where you will take a shower to refresh your body and then an appetite breakfast. Putting back your things on bus, we will drive Marrakech, meeting the Rissani city the former capital of the Tafilalt region and cross road between northern and southern regions, then the Todra Gorges a series of limestone river canyons near the Tinghir city; where the large palm forest and agriculture show in the Moroccan desert handicrafts along the way.Shaped thousands year ago thanks to the power of water going in the river the gorge gave us a very amazing view. We will drive through the road of the thousand Kasbahs in the great palm Skoura towards the valley of Dades which also has a spectacular landscape similar to that of the Todra gorge decorated with hundreds of Kasbahs. Taking the narrow road in the valley and stop by to enjoy it, have dinner and spend the night.

The next morning, you will have a breakfast meal. Then we will start the trip meeting the oasis of Skoura and the valley of roses which is cultivated with hectares of roses; their beauty and smell could be seen on May. The drive will take us to the Ighram “the fortified village” of Ait ben Haddou whose name is taken from the Ksar of Ait Ben Haddou, world Hiretage site by UNSCO in 1987, where famous films were shot to name but a few as Lawrence of Arabia, Gladiator, The Mummy. Tizi Ntichka, is the next stop, a mountain wind road which we will climb to the top and take picture of the amazing view. At the end of the road, Marrakech was known in Tamazight as Amour N Akouch or the land of GOD. In this beautiful city comes the end of our services.